Death on the Eastern 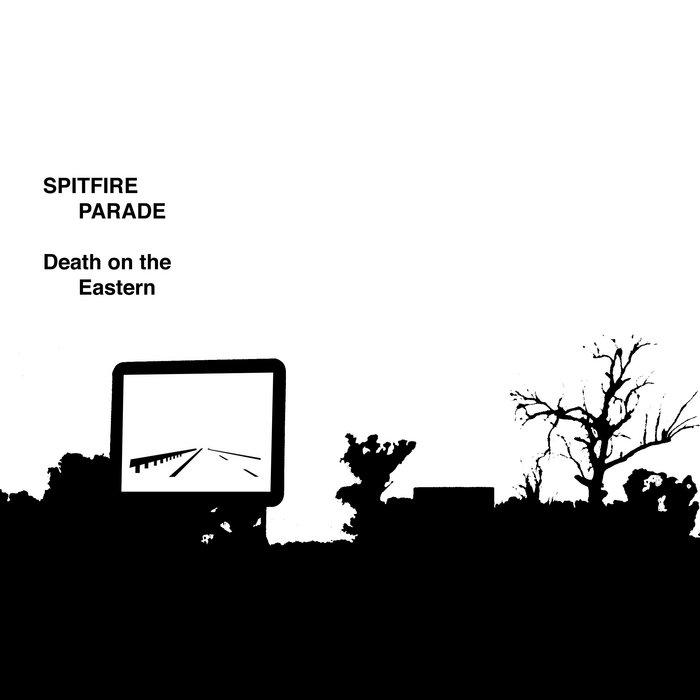 Melbourne-based four-piece band Spitfire Parade describe their sound as “electronically enhanced Ballardian drone-punk”, and this latest independent release ‘Death On The Eastern’ follows on from several other Bandcamp releases over the past year and a half, the most recent being 2009′s ‘Now’ remix collection. When I listened to the intro track here, ‘Slaughterhouse Of Failure’, which opens from what sounds like a stolen answering machine sample of an elderly relative leaving a message about dinner, only for buzzing, ‘mock-inspirational’ analogue synths and ascending metallic guitar solos to suddenly lock in around samples of a motivational religious speaker [in 'This Time'], the first associations triggered here for me were early nineties Sydney electro-punk pranksters Mr Floppy. Indeed, the punky, deliberately primitivist [‘Seconds’] certainly calls to mind at least a few flashbacks to Mr. Floppy’s classic ‘Homebrew’, with its yelled, thuggy vocals and Suicide-style blur of cheap drum machine rhythms, but in this case, it’s more a Buzzcocks meets Primal Scream circa ‘Xtrminator’ vibe that Spitfire Parade are really going for.

There’s certainly an impressive amount of lateral experimentation going on amongst this album’s comparatively brief 36 minute running time, ranging from ‘Rattlesnake’s jagged fusion of free-jazz horn bursts, sinuous post-punk bass figures and chaotically manipulated samples, through to ‘Heatwave’s virtual car chase theme, which even manages to throw a mass of video game-style police sirens beneath the trip-hammer drum machines and Mission Of Burma-style punky vocal hooks, and ‘When I Get Home’s moody flameout of Joy Division-esque guitar noise and tribal programmed rhythms. While the references are often easily to pinpoint here though, in this case it’s the quality of the songs themselves that really counts, making Spitfire Parade considerably more than just another in the seemingly endless wave of post-punk centred acts operating these days. It’s also well worth mentioning the gorgeous packaging on the handmade CDR release, which features an opaque multi-leveled sleeve constructed using onion-skin paper and transparency.

Mixed by James Dean and Sasha

Cover design and layout by Sasha and Tom.

Bandcamp Daily  your guide to the world of Bandcamp